Indonesia has a diverse ethnicity, recorded more than 1430 tribes according to 2010 census data. This makes Indonesia rich in diversity and art. Each tribe has its own trademark and also has different art in each tribe. This is an attraction for foreign tourists. In addition to making culture and original art of Indonesia became famous.

In addition, there are also witnessed the traditional culture of Indonesia in order to conduct research. Here are five of them that are already famous in the world.

UNESCO has established Batik Indonesia as “Masterpiece of Oral and Intangible Heritage of Humanity” by UNESCO on October 2, 2009. Since then, every October 2nd, Indonesia always commemorate the National Batik Day.

Batik was originally introduced to the world by former Indonesian President Soeharto. At that time he was wearing batik at the UN Conference. Batik is not only identifying as a cloth with motifs made through traditional staining techniques. However, batik in traditional Javanese culture, more meaningful as a technique of making of that motif. Using natural “night” colors and “canting” tools in natural fibrous fabrics. Until now, batik continues to develop, both on the motive, and how to make it. 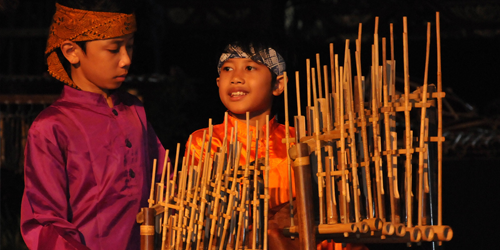 Angklung is a multitortal musical instrument (double pitch) that traditionally developed in society. This instrument is made of bamboo, plays it by shaking. The sound comes from a clash between bamboo. So as to produce a vibrating sound in the tone of 2, 3, up to 4 tones in each small size.

Angklung Indonesia has received official recognition from UNESCO as “Representative List of the Intangible Cultural Heritage of Humanity”. Former Indonesian Ambassador to UNESCO Tresna Dermawan Kunaefi who submitted his certificate to national education minister Muhammad Nuh in Jakarta. On January 19, 2011.

Countries like Korea, Japan and Malaysia are very fond of this instrument. They have introduced angklung to school-age children.

The original performing arts from Indonesia that flourished on the island of Java and Bali has been famous since hundreds of years ago. Balitung inscriptions that existed since the 4th century prove the existence of wayang at that time, with the notes “Galigi mawayang”. In its development, there are several types of puppets. Among Wayang Kulit, Wayang Golek, up to Wayang Orang, and with a growing story as well.

On November 7, 2003, UNESCO has also recognized Wayang as one of the cultural art of Indonesia in the list of “Masterpiece of Oral and Intangible Heritage of Humanity”. Until now, we can still see Wayang performances in this Maritime country.